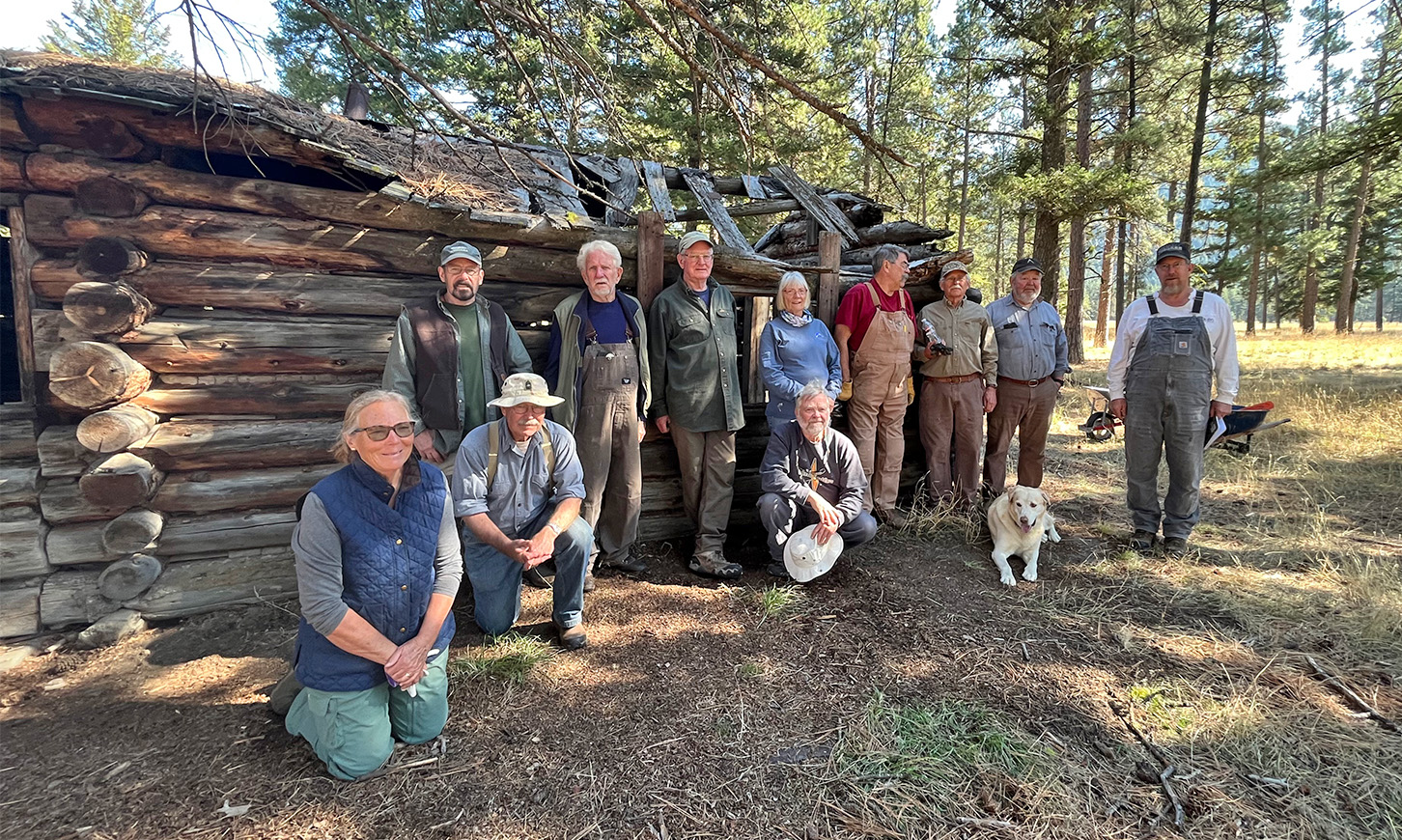 Thanks to a grant from the Historical Museum at Fort Missoula and community donations, and with professional guidance and volunteer labor from the Friends of Upper Rock Creek Historic District, stabilization of Pete’s Cabin is underway.

Pete’s Cabin, a feature along the Rock Creek Confluence universal trail, was the home of Peter Terminus, a Russian immigrant who stowed away on a freighter bound for New York when he was 13 years old and made his way to Montana. He worked on the railroad, as a logger, and helped many ranchers on Rock Creek.

Pete came to the Corra Ranch, now the Confluence property, during the influenza pandemic of 1918. When the family became ill, Pete cared for their animals and kept the ranch running. In gratitude, the Corras built Pete a modest log cabin so he would always have a home on the ranch. Pete lived a simple life and kept a well-tended garden where he grew most of his own food, including lots of potatoes. When Pete died, Theresa Corra scattered his ashes at the base of a favorite apple tree growing behind his cabin.

When Five Valleys purchased the Rock Creek Confluence in 2012, Pete’s Cabin had been aging gracefully in the decades since Pete’s death. We knew that Pete’s cabin was an important part of the Confluence story, and if we didn’t act to protect it, we might lose the opportunity to keep that story alive. Five Valleys is not a historic preservation organization, however, so we looked to outside experts to guide us through the process.

We were fortunate to find experts right in our midst: Milo McLeod, retired Lolo National Forest archaeologist, and Janene Caywood, cultural resources specialist and founding member of Preserve Montana (formerly Preserve Montana Alliance). Milo and Janene are two of Missoula’s most influential historic restoration advocates and have worked on historic preservation projects across the state.

In 2008, Milo founded a non-profit group, Friends of Upper Rock Creek Historic District, to complete restoration of the Morgan Case Homestead, Hogback Homestead, and Rock Creek Guard Station in Upper Rock Creek. The Friends operates under the umbrella of the National Museum of Forest Service History, with generous financial support from the Harry L. Willett Foundation. With their work finishing up on those two projects, the Friends group graciously agreed to make Pete’s Cabin their next project.

The first step was to assess the potential of stabilizing Pete’s cabin to prevent further deterioration. In May 2021, the Friends group hired Kirby Matthew, retired U.S. Forest Service Historic Preservation Specialist, to conduct a professional evaluation of the condition of Pete’s cabin and identify opportunities for stabilization and preservation.

Kirby determined that preservation of Pete’s cabin was indeed a worthy project, noting that, although this “miner’s style” cabin was a common cabin type in Western Montana in the 1920s, it is unusual to find one that is still standing today. Kirby recommended a combination of stabilization and repairs to make sure that Pete’s cabin will persist for decades to come.

The all-volunteer Friends group held their first official workday at the Confluence in October 2022. Members Fred Smith, Charles Sherfey, Sharon Attebery, Gene Thompson, and Tim Light, along with Milo, Janene, and Kirby, shoveled out countless wheelbarrow loads of conifer needles and cones that had been accumulated by rodents for decades. They also took careful measurements, made supplies lists, and took photographs of every feature, nook, and cranny to aid in the preservation process.

Over the coming months, Five Valleys plans to work with the Society of American Foresters to mill the lumber needed for the cabin project at the Historical Museum at Fort Missoula sawmill, a sawmill used in the early 1900s near Deer Lodge that is representative of the portable sawmills that were brought between the various logging sites in Montana.

Funding for supplies and materials was made possible by a grant from the Historical Museum at Fort Missoula. In May 2023, the Friends group will return to the Confluence to begin the delicate work of replacing sill and wall logs and installing a new roof.

Thank you to Kirby, Milo, and the Friends group for their initial work to ensure this piece of Rock Creek history for future generations to learn from and enjoy. Stay tuned!