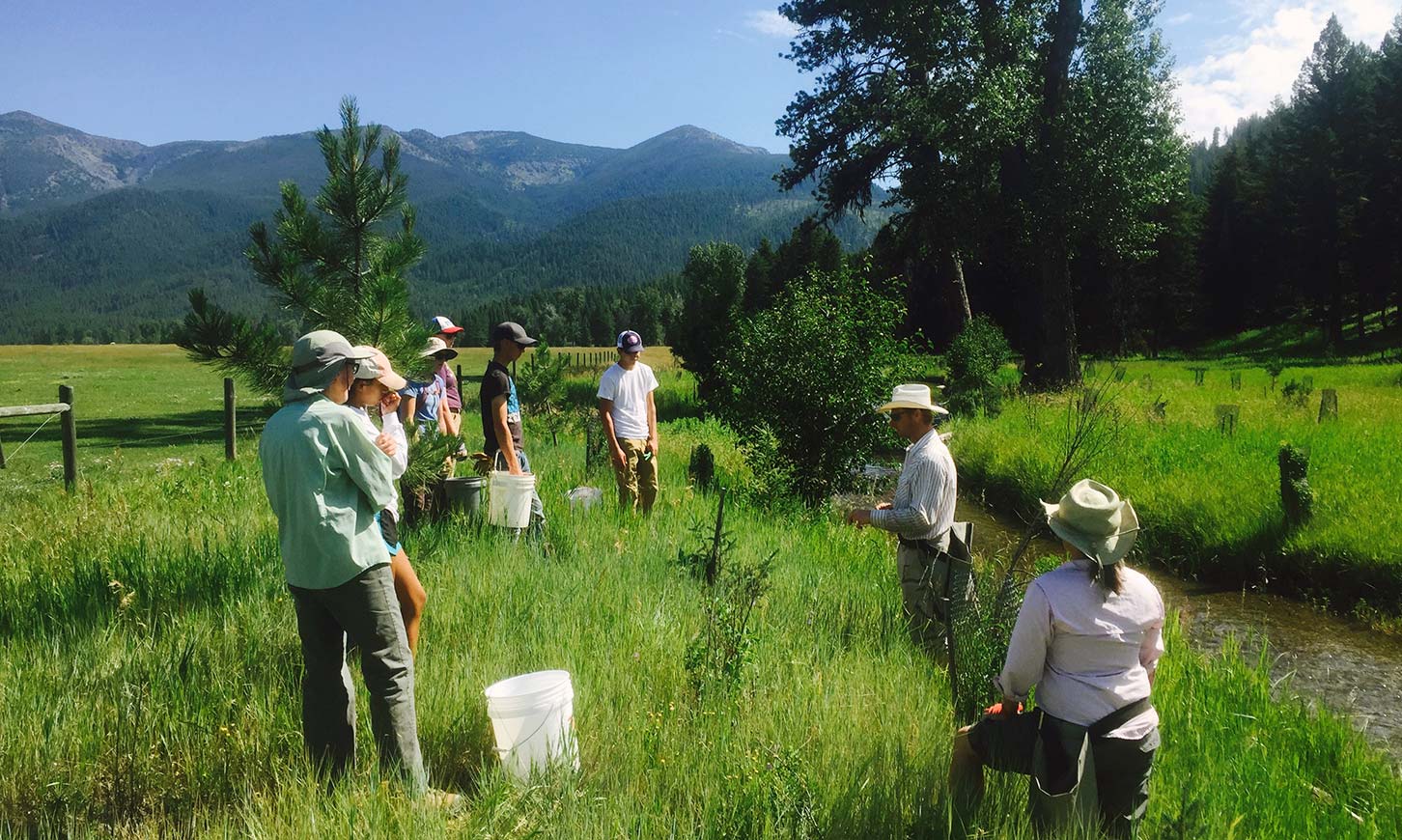 Giving Thanks: Partners in Restoration

This past summer saw our Hands on the Land program complete some days of hard work and stewardship in the name of healthier open lands. As we reflect on the season, and look to the holidays and New Year, we're incredibly thankful for the rich opportunity to support Montana landowners in their commitment to conservation.

A Missoula County Youth in Restoration crew and a Montana Conservation Corps youth crew pitched in this summer on the Sundance Ranch in near Ovando to remove the cages that have protected thousands of native shrubs and trees that were planted in the mid-2000s as part of an extensive riparian restoration project along the Rock Creek (not to be confused with the Rock Creek at the Confluence Property) and its tributaries. The plants have been safeguarded from deer and elk browsing for a decade, but they have now outgrown their cages. Removing the cages over the whole two-mile stretch is a massive job, and having help from these hard-working young women and men was tremendous help. We are pleased to announce that in October we completed removing the last of the cages, wrapping up a solid decade of restoration on the Sundance.

The Missoula County Youth in Restoration crew joined us at the Peterson Angus Ranch near Drummond in July to help Randy and Sue Peterson pull hound’s-tongue. The Petersons employ an integrated approach to noxious weed management on their ranch, including the use of biocontrol insects on spotted knapweed, leafy spurge, and Dalmatian toadflax. Hound’s-tongue is not widespread on the ranch, but is persistent in one remote draw. The Missoula County Youth in Restoration crew has spent a day on the Peterson Ranch for the past three years pulling hound’s tongue in this area. While hound’s-tongue pulling is hardly a glamorous job, the crew admits it’s very satisfying to make a tangible difference in just one day. In addition, the scenery on the Peterson’s ranch is breathtaking, making this a favorite job site for the youth crew each year.

In June, right after the bitterroot blooms faded away, a mob of volunteers attacked noxious weeds along the banks of the Clark Fork River on the Griffith-Fee easement. Knapweed plants were pulled and bagged by the hundreds giving the remaining native plant community less competition, more room to breathe and more moisture to soak up during their short growing season. Afterward, landowners Gary Fee and Jo Burris graciously hosted the volunteers to a delicious barbecue at their home overlooking the Clark Fork.

Aiding Neighbors on the Roberts Easement

Five Valleys hosted volunteer day at on the Roberts easement near Superior this past May. Jan Roberts and her husband Dick completed a conservation easement with Five Valleys in 1997. Dick passed away in 2007, and Jan still lives off the grid in their beautiful log cabin. At 91, Jan is still going strong, but needed help with a few chores—which included piling and burning brush, cutting firewood, and removing a few trees that were too close to the house. The volunteers enjoyed a day spent along scenic Oregon Creek and left knowing their hard work was very much appreciated.

To all the volunteers, landowners and partners that helped make our 2016 Hands on the Land season a success, thank you!

Interested in joining our Hands on the Land volunteer crew? Learn more.