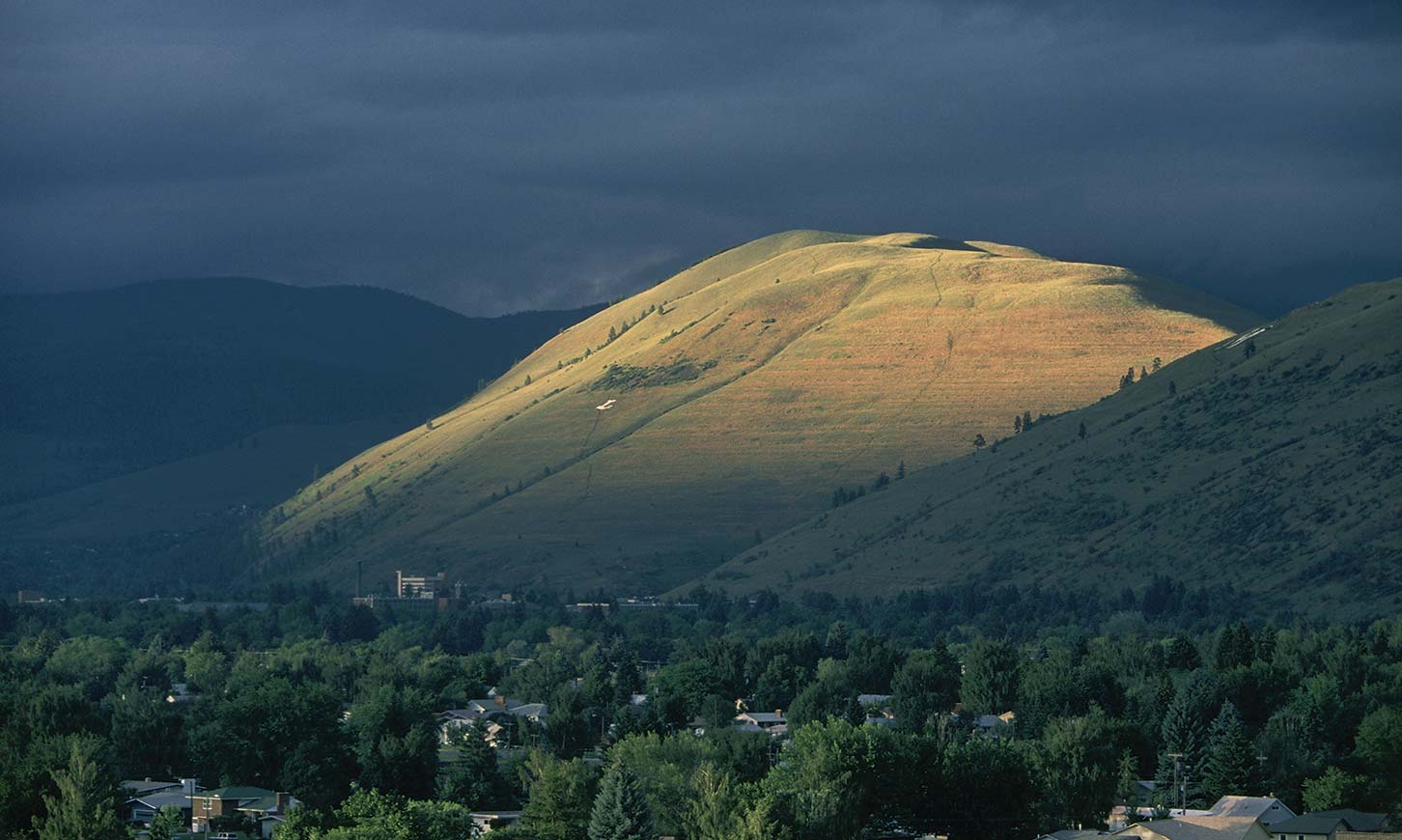 Just 20 years ago, those words emblazoned on posters featuring Nelson Kenter’s iconic photo of Mount Jumbo were seen all over town, encapsulating the vision, hope, and determination of the citizens of Missoula to protect the landscape that shapes our lives in this valley.

What had begun years earlier in quiet conversations among an informal community group had grown into something of a human tidal wave bent on protecting the wildlife habitat, the scenic beauty, and the recreational opportunities threatened by Missoula’s rapid growth.

Mount Jumbo stands regally at the mouth of Hellgate Canyon, just north of Mount Sentinel, forming the picturesque gateway to the Missoula Valley. Jumbo became priority number one because of this visibility, the elk herd that congregated on Jumbo’s open south-facing slopes every winter, the diverse and unique plant communities that occur there, and the immediate threat of development as much of the mountain was converted from historic agricultural uses.

Five Valleys Land Trust was still a fledgling land trust, evolving from the Five Valleys River Park Association. We took the lead in securing purchase options on the four private parcels that comprised the 1,600-acre project, parcels running from I-90 north all the way to the Lolo National Forest Boundary and the Rattlesnake National Recreation Area and Rattlesnake Wilderness Area.

Those purchase options were a legal way of securing an opportunity for the entire community. They also posed a challenge—turning the opportunity into reality would require $3.2 million. This was a challenging time economically in Missoula and an open space bond of this magnitude had never been proposed, let alone passed. Some said it would be impossible.

The Rocky Mountain Elk Foundation was instrumental from the beginning, providing vital financial assistance, leadership, and passionate support of the grassroots organizing effort that was needed. Montana Fish, Wildlife and Parks backed the effort from the outset as well, recognizing the mountain’s critical habitat value. The City of Missoula, Missoula County, and the Open Space Advisory Council of citizen volunteers also enthusiastically joined the fray from the start.

Civic organizations and local and national conservation groups were also key to the effort. The Nature Conservancy, in particular, stepped in to provide a timely loan so that a critical option payment could be met to keep the opportunity alive. Under the steady hand of then Five Valleys President, Chuck Tribe, and with literally hundreds of hours of expert pro-bono legal work from local attorney Bob Knight, the effort gained momentum. Before long it had captured the imagination and hearts of a great cross-section of the Missoula community.

There were holdouts and notable opponents, but many business leaders, the local newspapers, and television and radio stations supported and promoted the civic enterprise in countless ways. They were joined by people from all walks of life. Hundreds of volunteers worked on every conceivable kind of fundraising scheme, school children all through Missoula raised money for the mountain with bake sales and raffles. Volunteers wrote grants, engaged philanthropists, or lobbied our Congressional delegation in hopes of tapping into the federal Land and Water Conservation Fund. Hundreds of volunteers worked to buy the mountain. All of Missoula seemed piqued with the excitement of realizing a grand, shared dream.

On one unforgettable election day, November 7, 1995, Missoulians braved a wintery blast to reach polling places and passed a $5 million open space bond by a wide margin, with funding for Mount Jumbo as the centerpiece. Those funds not only made it possible to complete the Mount Jumbo purchase, they were key to the wildly successful open space program that continues today as a model for community conservation in the Rocky Mountain west as well as around the rest of the country.

On one unforgettable election day, November 7, 1995, Missoulians braved a wintery blast to reach polling places and passed a $5 million open space bond by a wide margin, with funding for Mount Jumbo as the centerpiece.

Once secured, most of Mount Jumbo was moved into City of Missoula ownership in 1997, with the remainder going to Montana Fish, Wildlife and Parks and the Lolo National Forest. The day the mountain was officially transferred to City ownership the Missoulian headline blared, “Jumbo is Ours!”

Today the mountain and the other lands acquired through the Open Space Program have become an economic engine and a magnet for outdoor recreation while continuing to protect that critical wildlife habitat. Now, one can stand on a street corner in downtown Missoula and look to the open slopes and timbered mountains in every direction and witness the blessings of a protected landscape and wonderful wildlife habitat that are a direct result of the community conservation ethos that was forged in Missoula by the campaign to save Mount Jumbo.

Poll after poll demonstrates that those protected public lands around Missoula are at the top of the list of qualities that make Missoula and the Missoula Valley such a wonderful place to live. The Mount Jumbo campaign truly was the start of something big.

Read more about Mount Jumbo's 20th anniversary in the Missoulian.