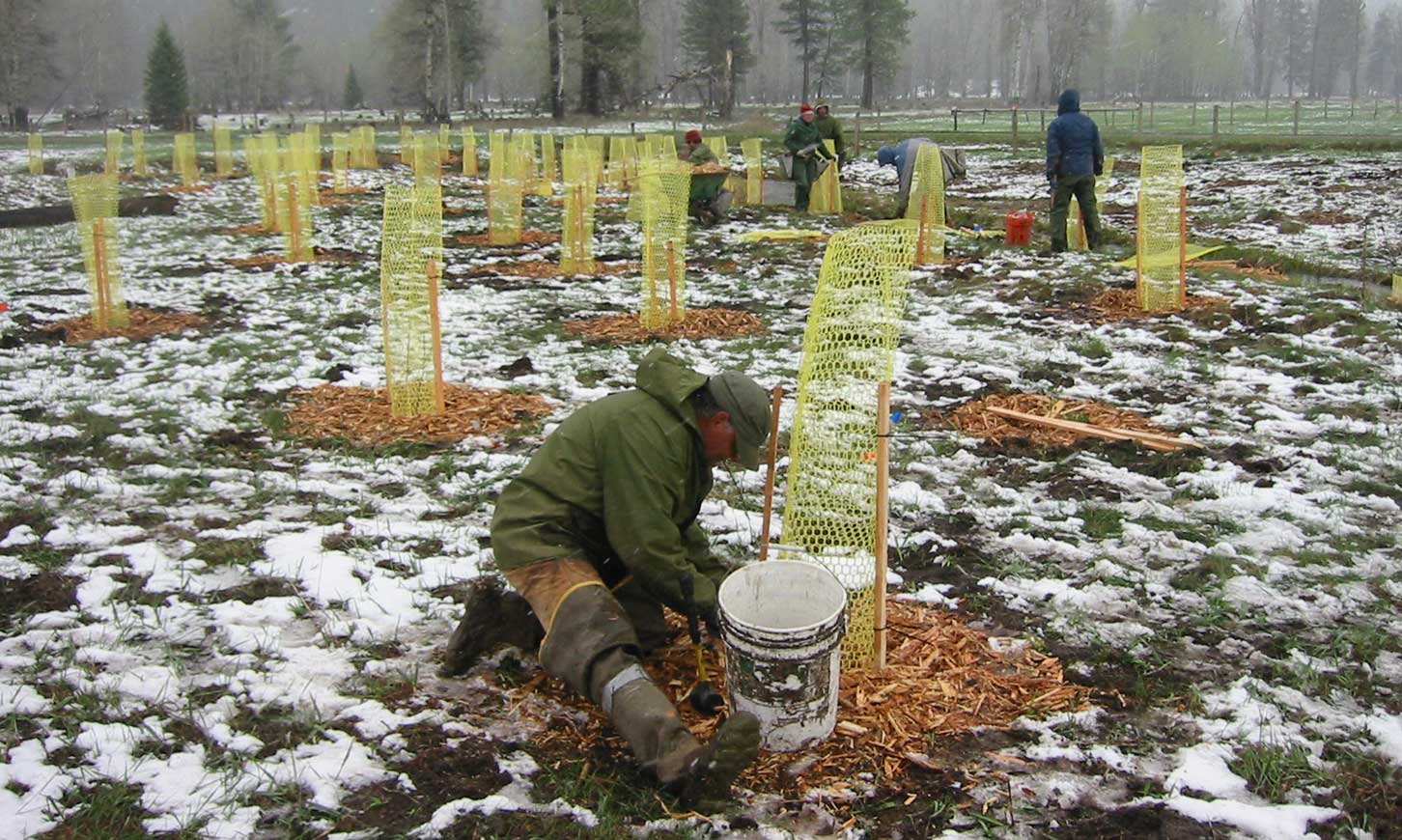 In the summer of 2000, the same year Jill Perelman placed a conservation easement on the Sundance Ranch in the Blackfoot Valley, Montana Fish, Wildlife and Parks fisheries biologist David Schmetterling captured a westslope cutthroat trout in the Clark Fork River just below Milltown Dam. After he tagged it with a radio transmitter and released it upstream of the dam, it swam over 70 miles—first up the Blackfoot River to the North Fork of the Blackfoot, then into Rock Creek, and finally into Dry Creek, a spring-fed tributary on the Sundance Ranch. Its epic migration, which made headline news in the Missoulian, showed that the aquatic system in the Blackfoot Valley was still connected enough for a fish to swim all the way from the confluence of the Blackfoot and Clark Fork Rivers back to the headwaters to spawn.

By the time this dramatic fish story unfolded, Montana Fish, Wildlife and Parks, the U.S. Fish and Wildlife Service, and Trout Unlimited were actively working with landowners along Rock Creek and its tributaries, Dry and Salmon Creeks, to install fish screens, reconstruct altered stream channels and improve aquatic and riparian habitat. These spring-fed creeks all historically provided spawning habitat for both westslope cutthroat trout, a Montana Species of Concern, and bull trout, a federally threatened species. They also provided a steady source of cold water to the North Fork of the Blackfoot River. Over decades of agricultural use, however, the creeks had become severely degraded from ditching, draining, diversions, and poor grazing management. Their channels were over-widened, the streams were murky with sediment from eroding stream banks, diverse riparian vegetation had been converted to pasture grass, and the water was too warm for native fish.

Rock Creek, Dry Creek and Salmon Creek all flow across the Sundance Ranch. When Jill Perelman purchased and placed a conservation easement on the Sundance Ranch, she and her son Kent Perelman and daughter-in-law Mary Shaffer quickly became enthusiastic participants in the restoration effort. The first phase of restoration entailed extensive channel reconstruction along Salmon Creek, which had been dredged and straightened in the past. Next, reaches of Rock Creek that were over-widened from livestock overgrazing were restored using sodmats excavated from nearby Madison Meadow, a 100-acre wet meadow located partially on the Sundance Ranch. Through this effort, the Rock Creek channel was narrowed from an average of 26 feet to an average of 10 feet.

Although revegetation of the stream banks was an important part of this project, the initial planting effort failed due to intensive browsing by deer and elk. Realizing that the investment in channel reconstruction would likely be lost if riparian vegetation was not established, a diverse group of partners embarked on an ambitious effort to revegetate all sections of the restored stream channel on the Sundance Ranch. During two years of planning and propagation (2005-2006) and two years of planting (2007-2008), over 8,000 native tree and shrub seedlings and 2,000 locally collected cuttings were planted along 14,500 feet of stream bank. From black cottonwood and red-osier dogwood to chokecherry and rose, the 16 species planted showcased the diversity that is represented in nearby undisturbed stream reaches.

In so much of Five Valleys’ work, partnerships are the key to conservation success. Along with the Perelman-Shaffer family and Five Valleys Land Trust, partners in the Sundance Ranch restoration effort included the USDA Natural Resources Conservation Service, Montana Fish, Wildlife and Parks, The Nature Conservancy, the Big Blackfoot Chapter of Trout Unlimited, the U.S. Fish and Wildlife Service, Greenwing Restoration LLC, and the Montana Department of Natural Resources and Conservation. Steven Kloetzel from The Nature Conservancy and Andrea Morgan from Greenwing Restoration provided expertise in collecting propagules, propagating, and planting seedlings and installing browse protectors.

Once the planting was done, Five Valleys’ stewardship manager at the time, Grant Bronk, recruited volunteers to pitch in, laying the groundwork for the Hands on the Land volunteer program that has flourished at Five Valleys in the years since. Dedicated individuals like Missoula resident and volunteer extraordinaire Steve German returned to the property several times each year to water seedlings and maintain the browse protectors. Youth groups, including the Montana Conservation Corps, the Missoula County Youth in Restoration crew, Big Sky High School natural resources students, and University of Montana ecological restoration students have all contributed to the effort over the years.

By fall of 2016, the riparian shrubs and trees on the Sundance Ranch had grown so much that their plastic browse protectors were bursting at the seams. In a final volunteer effort, thousands of cages were removed along almost three miles of stream. While the full ecological benefits of restoration at the Sundance Ranch will be realized over many decades, we can already see the potential for a damaged ecosystem to recover, given careful attention from landowners, partners, and volunteers.

Beyond improving habitat at a local scale, restoration on the Sundance Ranch has larger implications for migratory trout in the Blackfoot watershed. Spring-fed, headwater streams like Dry, Salmon, and Rock Creeks play an important role in maintaining cool temperatures and stable flows in key spawning streams like the North Fork of the Blackfoot. Research has shown that active restoration along these headwater streams can significantly reduce summer stream temperatures to optimum levels for native trout. Looking to the future, restored spring creeks on the Sundance Ranch may prove even more important based on regional climate projections that predict a continued loss of suitable habitat for coldwater fish, especially in low-elevation streams like the North Fork of the Blackfoot River.

Good news for wild trout continues to come. The Milltown Dam was removed in 2008, and multi-partner stream restoration work proceeds throughout the Blackfoot Watershed. Thanks to the Perelman-Shaffer family’s commitment to protecting the Sundance Ranch with conservation easements, the investment in restoration here will be safeguarded in perpetuity.