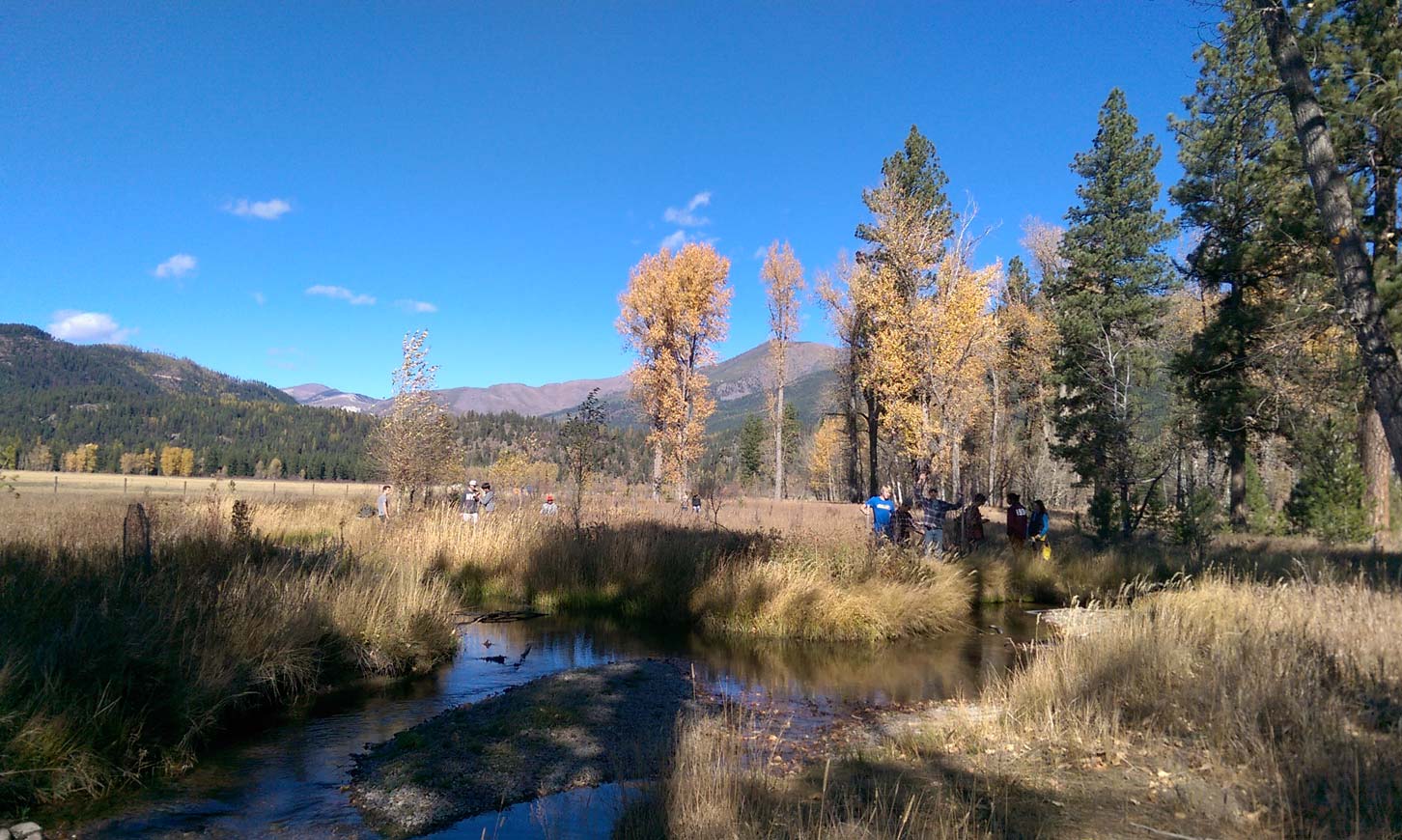 Just north of Ovando there’s a valley that would make a Hollywood director sigh. Vast, open meadows are surrounded by the rugged slopes of the Scapegoat Wilderness. Gentle creeks wind through the landscape, which teems with wildlife. And in the middle of it all sits the Sundance Ranch.

Originally part of the historic Copenhaver Ranch, the Sundance Ranch had been farmed and ranched by generations of Montanans. But in the 1990s it was divided into 38 developable parcels and sold. Fortunately, an openhearted conservationist named Jill Perelman purchased all 38 lots, and with her family began to knit the ranch back together. In 2000, Jill completed a conservation easement with Five Valleys, protecting the property’s 700+ acres of grasslands, wetlands, forests, and working agricultural land. In 2003, Jill’s son Kent Perelman and daughter-in-law Mary Shaffer protected an additional 70 acres of the original Copenhaver Ranch with conservation easements. But while the property was now whole, it wasn’t entirely healthy.

Decades of livestock over-grazing had resulted in the serious degradation of the property’s three waterways: Rock Creek (different from the Rock Creek near Clinton) and its two tributaries, Dry Creek and Salmon Creek. These streams were all historical spawning streams for bull trout, a federally threatened species, and westslope cutthroat trout, a Montana Species of Concern. And they suffered from a list of ills: bank erosion, sedimentation, increased stream temperatures, and loss of riparian vegetation. Due to these conditions, few native trout survived on the Sundance.

Starting in the early 1990s, Montana Fish, Wildlife and Parks, the U.S. Fish and Wildlife Service, and Trout Unlimited began working with 13 landowners to reconstruct altered stream channels and improve aquatic and riparian habitat along Rock Creek and its tributaries. The Perelman-Shaffer family quickly became enthusiastic participants in the restoration effort. Recognizing that the investment in channel reconstruction would only be protected if riparian vegetation was established, a diverse group of partners embarked on an intensive revegetation effort along all sections of the restored stream channel.

Along with the Perelman-Shaffer family and Five Valleys, project cooperators included the Natural Resource Conservation Service, Montana Fish, Wildlife and Parks, The Nature Conservancy, the Big Blackfoot Chapter of Trout Unlimited, the U.S. Fish and Wildlife Service, Greenwing Restoration, and the Montana Department of Natural Resources and Conservation. The ambitious, multi-phase effort included planting over 8,000 native tree and shrub seedlings and 2,000 locally collected cuttings along 14,500 feet of stream bank.

Over ten years dozens of professionals and hundreds of volunteers worked to ensure that the restorations efforts held. Cages were installed around each seedling to protect them from browsing deer, elk and moose. The thousands of shrubs were watered by hand, summer after summer. It was out of this Herculean effort that Five Valleys’ Hands on the Land volunteer program was born.

One of the project’s highlights came in early the 2000s, when a westslope cutthroat trout was tagged and transported above the old Milltown Dam, near Bonner. Once upstream, it began an epic journey up the Blackfoot River watershed until it reached Dry Creek on the Sundance. Now that the dam is gone, trout can migrate freely; but that one fish represented the first documented migration from the Clark Fork River to the Sundance in decades.

The Sundance Ranch project was inspired by the land and the desire to restore it. But as the story unfolded, like so many stories in the land trust community, it turned out to be about the people who made it happen: the Perelmans, hundreds of dedicated volunteers and a many conservation professionals. In 2016, volunteers removed the final cages protecting the seedlings, capping off a decade of restoration. Already, native trout are making a comeback in the creeks. Through hard work and collaboration, the Sundance Ranch has been one of Five Valleys’ most rewarding success stories; and one that inspires us, day after day.